Basics of Wire and Cable: Solid vs. Stranded Conductors 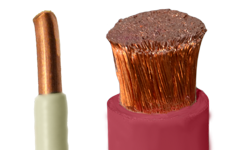 What are the main differences between solid and stranded conductors?

Stay up to date with our newsletter